Should we Support this Council Candidate?

Sad and ignorant:  Keunsoo "Jimmy" Chae is running for a Dumont council seat and leaves this bigoted and otherwise insensitive comment. Thinks he has the election in the bag.   Do we need this type of fabricated divisiveness in our town? Something to think about when you go to the ballots Tuesday November 6: 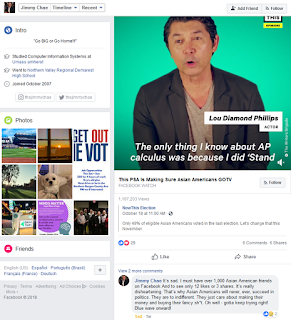 2018 Council Candidates: Exaggeration, Misrepresentation or Both???

Researching all Dumont Council candidates and came across Jimmy Chae. Would like to know why as "founding member and past president" of AREAA per the pic below 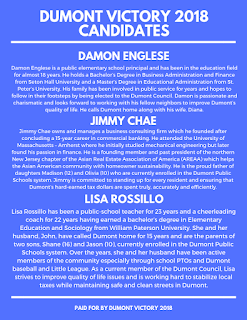 is he no longer member today and no one at the chapter he founded is willing to go on the record while members from other chapters hint he separated from the organization less than honorably? Before I am accused of airing "dirty laundry", consider why, as a founder of a real estate association promoting homeowner sustainability is there no evidence of the candidate ever holding any real estate license in the state of New Jersey?  Don't take my word for it, try to find Mr. Chae's license yourself.
Posted by Blog Admin

Faced with a loss of their majority in 2012, it appears that the departing regime wanted to leave their mark in a big way. Other than trying to teach us new economics, they leave with what appears to be a political attack document, disguised as an objective report, paid to the politically connected borough attorney and paid for by the Dumont taxpayers.

I wonder whether the subcommittee members actually read the report before signing it. If any of them need it read aloud to them because they have trouble "seeing the words" just send me a message. Anyway, the attempted lessons imparted appears to be:

- DPW remediation failure stems entirely from the neglect of two individuals;
- Cooperation by individual to testify without counsel was used against them;
- Current mayor and council completely unaware of alleged noncompliance;
- Form a vague oversight committee to completely prevent the problem from ever happening again.

The cost of these lessons? Well in excess of $5000 in professional fees.

Sure, but new questions emerge:

- Why could the remediation work not be performed concurrently with the "investigation"?
- Why was a resolution needed in April 2011 to appoint a subcommittee to investigate if a resolution granting the governing body subpoena power was passed in October 2010?
- Why did it take some five months after appointing the investigative subcommittee to replace a member due to "conflict of interest"?

- Why did the attorney bill for testimony from members identified in the report as uncooperative?

- Why are "non-relevant" documents made available only via OPRA?

Here's a tip: EVEN THIRD WORLD COUNTRIES ARE PUBLISHING ELECTRONICALLY. CUT THE NONSENSE AND PUBLISH DIRECTLY TO THE WEB!!!!!

Was this research necessary? This is what the NJDEP says about compliance efforts:

01-06-2011 Correspondence from NJDEP Regarding Remediation at DPW

Since NJDEP opted against penalizing the borough, what does that say about the tone and conclusions drawn by the investigative subcommittee report? Is it any wonder why the incoming mayor has told the press he is focused on the work, rather than the blame?

Sorry if I think the report is not very credible and at times misleading, considering the delays, stonewalling, smoke and mirrors I generally encounter when I approach the governing body with anything other than showering praise. This bell rang true, right up to the last meeting of the outgoing mayor and council.

Is this the way for the current council members to welcome their incoming colleagues and set the tone for 2012? Is this the line being drawn in the sand? I hope that for the sake of all, the tone and delivery of the mayor and newly split council will change for the better.
Posted by Blog Admin

Last but not final meeting of the year:

1. When the borough administrator commended the mayor for running the borough like a business (16:12), did he mean the borough was run like it was taken over by a hedge fund, extracting its value and saddling it with debt from excessive consultant fees and legal yet questionable deals before leaving it in a far weakened state for a future unwitting caretaker to deal with?

2. It may be legal, but is it appropriate for the outgoing council to vote on the scheduling of the M&C reorganization meeting knowing the mayor elect is requesting an alternate date?

3. What does it say about a councilman if he is so set on voting to award a multi-million dollar construction contract that the incoming mayor and council members did not fully review, yet when a resident challenges him to take responsibility for the project's schedule and budget, is on record saying that the resident is threatening him?

Mr. Mayor, I didn't attend every meeting to video record your self-absorbed being. I just so happened to attend more public meetings than you have because several of your current and past councilmen said that council meeting videos were too costly to produce. Your outgoing councilman also challenged me that I cannot possibly know everything that's going on because I didn't attend enough council meetings. Here we are, three years later worth of council meetings, budget hearings and committee meetings. If you and your team showed a modicum of humility, would you be welcoming Mayor Abrahamsen and councilmen Hickey and Riquelme next year? Is this a teachable moment? We will never know.
Posted by Blog Admin

Public Notice: A special meeting of the Governing Body of the Borough of Dumont will be held December 13, 2011 at 7:00 PM in the Executive Chambers of Borough Hall at 50 Washington Avenue, Dumont, N.J. The subject matter includes NJEIT Phase II Flood Control project and Twin Boro Field Remediation and Reconstruction project. There will also be a closed session to discuss litigation. Formal action may be taken.

Comment: A councilman demands that T&M not reduce cost without reducing the scope.
Questions:
- Agreed, but why admonish them against doing so next time?
- Why can you not demand that they rebid?
- What's the rush?
- Has the adage been forgotten: You can have the job done cheap, fast, or right. Just pick two...?

Comment: So many questions about the bids, yet some on council seem intent on voting before the answers are given.
Question:
- Have some on council already made up their mind whether to award the contracts?

General: Why are the bids not made public after opening? What is the secret? Public Bids and the purchasing process are no secret in this NJ township, for example.

Fortunately, voting has been tabled until the regular M&C meeting on 12/20/2011.
Posted by Blog Admin

is where my documents live!